Not that long ago, I caught myself asking this question from this Irish guy who had just moved to Finland. What he answered is not relevant, but I think this question shows pretty well the humility of us Finns. We know that we are a small nation in the Northern part of the world, and we work hard to make people notice our existence. Still it always seems to amaze us if someone knows something about our culture or if someone is willing to be a part of it. 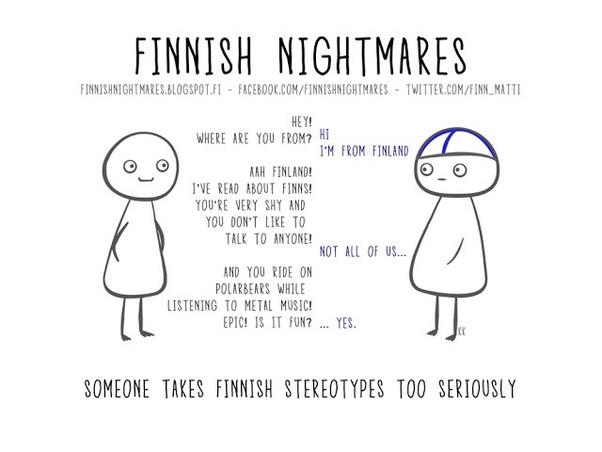 Just about a month ago I read this article about the quotes that describe the Finnishness the best. One of them was “Ei minua varten tarvii keittää” which can be translated to “There is no need to cook just because of me”. Finnish people are usually very modest and they do not want to bother other people with their needs. This can be seen in everyday life, for example in public traffic. People do not want to sit next to people they do not know and they certainly do not want to communicate them. Even when they are sitting next to the window in a bus and want to get out. Some brave individuals might say something to the person sitting next to them, but most of the time they are expressing their need to get out by coughing or moving restlessly. Sometimes, in worst cases, this might lead to travelling couple of extra bus stops, but that is OK as long as you do not have to talk to strangers. The modesty can also be seen in other situations. I often overhear people talking about the problems they are having, for example with their family or co-workers. Other people have annoying habits and the Finns like to complain about them to their friends. This sounds really normal and it happens everywhere, right? The difference is that we do not do anything about it. Again, we are trying not to bother others with our own needs. This might lead to bigger problems later when the little annoying things pile up and people need to confront them. 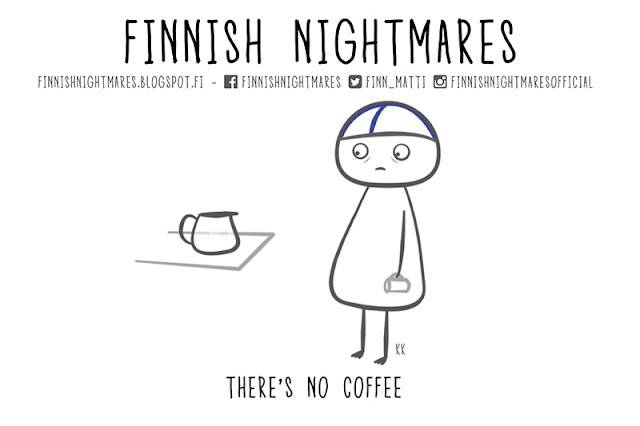 The humility and modesty can also be seen in the following situation. Try to compliment a Finn. Or try to tell them how wonderful their country is or how well something works. Normally people would say “thank you”, if you compliment them and they might even carry on the conversation about well-working public transportation or good healthcare. “What is the reaction you get from a Finn?” you might ask. Instead of “thank you” you will get some mumbling about how “it is nothing” or “this old thing” or some argument how there should be more busses from Hervanta to Tampere City Center. 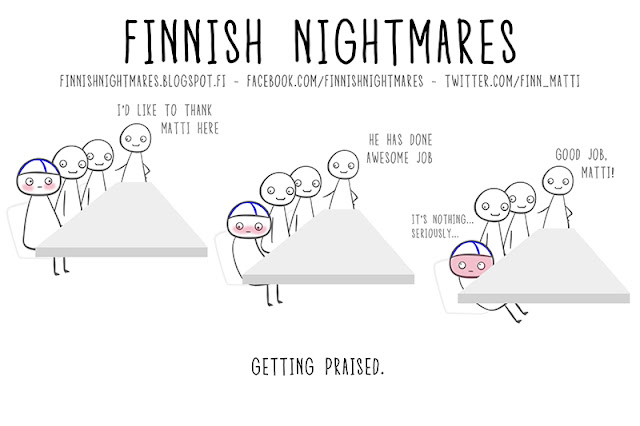 In Finland it is very common that people speak at least two languages. We are taught English and Swedish in school and many people speak at least English pretty well. The problem with learning languages as a Finn is again our modesty and our perfectionism. We often compare ourselves to native speakers and get frustrated if we are not on the same level as them. Many of my foreigner friends have told me that they find it easy to communicate in Finland and that almost everyone they have met has spoken really good English. Despite of the good level of English, people are too shy to speak it, because they do not trust themselves to be good enough. All this modesty in humility hides the fact that although we always find something wrong with Finland, we are secretly very proud of it. It is our “isänmaa” – “father’s land” and we want people to know us and our country. We are happy if someone asks something about Finland, knows someone Finnish or has visited our country. It is a topic that we do not get tired talking about. Especially when we are a little bit drunk. But we will not get into that in this post. 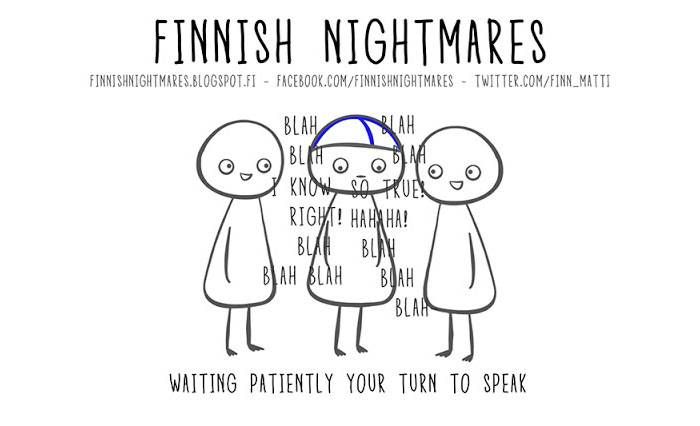 In conclusion, we are always comparing ourselves to “bigger” or “better” things and often forget or ignore the fact that we seem to have it all figured out pretty well.