The Finns are commonly a very self-centred group of people. In Finland, if your neighbour has a nice car, is happily married and has a lot of disposable income you cannot feel but angry and envious about his or her life. No wonder it is commonly said that Finns would pay 100€ so that the neighbour will not receive 50€. If there was such a thing as “national emotion”, for Finns it would be envy.

But when it comes to Finland receiving attention outside of Finland, whether it is success in the Olympics or a Finnish actor being cast in a minor role in a Hollywood movie, the whole country celebrates in unison.

The aforementioned sentence has gained international recognition through the hundreds of thousands of times the Finns have used it in the comment sections of videos, articles and forums throughout the internet. Lately people have started using the sentence sarcastically, but there is no doubt that some people still use it non-sarcastically.

The fact that the Finnish people are so proud of their home country and their own citizens, whilst still being the most envious people in the world is quite adorable in a completely nonsensical way. I mean I hate my goddamn neighbour, but his merits really show the world how great we Finns are!

I guess it is a love-hate sort of thing. Just like the Finnish nature, the ordinary Finnish person is quiet, isolated and untouched by any human being. If there is something we Finns hate it is talking, being around people, and above all, getting touched by people whose personal lives we do not know anything about. I am quite sure that the average Finnish person would die if he or she had to meet up with a bunch of talkative Italians, who would all want to give him or her a kiss on the cheek when they met.

The Finns are wary of things they do not know or understand, more so than humans in general. This mixed with the culture of not being very talkative, unless drunk, makes Finnish people seem very rude and even racist towards foreigners. In reality the Finns are usually very intrigued by foreigners and especially by their opinion on Finland, the Finnish people and Finnish food. Oh and “Sauna perkele!”.

Even though Finns seem grumpy and disrespectful, they are very eager to help their fellow human beings. Should a foreigner be lost in Helsinki for example, they should ask a Finn for directions. The Finn will show the foreigner to his or her destination, tell a little about how we defeated the Soviets during the second world war, recommend their favourite Finnish delicacies and demand that they go to sauna with them.

Bottom line is that deep down the Finns are very friendly and nice folk. You just need to lure that out of them by asking something about Finland or Finnish culture. 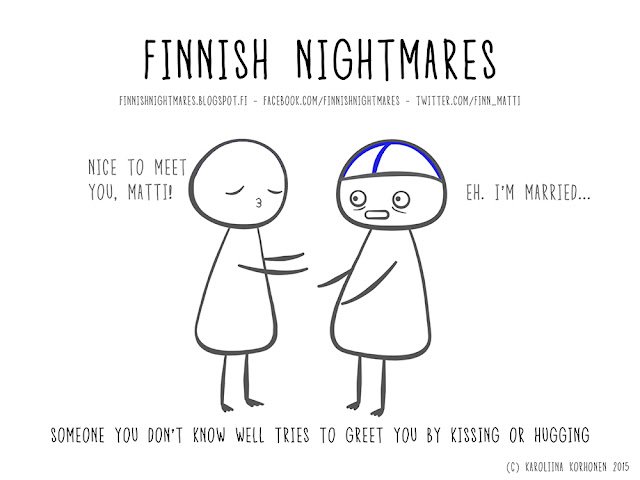 3 thoughts on “My thoughts of Finnishness and Finns”