Moomins
As an art student, the first thing I want to mention about Finland is Tove Jansson and the Moomin comics that she created. Though the Moomins got their start in the 30’s as a mere scribble on the outhouse wall they have become an international prestige.
After more than 80 years, Moomins are still going strong. Comicbooks have turned into TV-shows, museums, dishes, fabrics… you name it. Story, originally writen about lonelines, alcoholism and depression has turned into something sweet and comforting, a good childhood memory. Some how I see this as a very Finnish thing, even if there is a cold and dark winter, there is also going to be spring, summer and a beautiful fall. So there is always something to wake up to after a long winter! 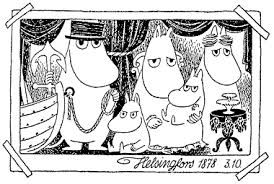 Four seasons
And that leads us to the four seasons. In Finland, the year is devided between four distinct seasons – autumn, winter, spring and summer. Unlike in many other parts of the world, in Nordic countries it can be +30°C during the summers and during the winters the temperature can go as low as -40°C. During the winters the sun barely gets up, but then in the summer it barely sets. After the long winter of snow, ice and darknes the sun appears again. Snow and ice melt away, birds get back from the south and summer is ready to start in a couple of months.
Summers are bright and hot, though there can be some rain. During the summer most students have their summer vacation and cities and countrysides are full of life again. After summer, it’s time for autumn. Little by little the weather gets colder and days shorter. Leaves will start to show their autumn colors “ruska” in finnish. In a couple of months its time for snow again.

Salmiakki
Salmiakki translates to salty liquorice. It’s a traditional Nordic candy. Its both salty and sweet at the same time and it’s made out of ammonium chloride. It’s not certain, when salmiakki was created, but it’s said to be originated from a cough medicine that was made in pharmacies. In the 30’s it was already produced in the Nordic countries as a candy. Most of the Finns enjoy the taste of salty liquorice, but there are some exceptions of course as always… not me though…!