When one should describe the typical Finn, we often hear following stereotypical things. Finns are shy, they love salmiakki and sauna, and can overcome any obstacles with their strong guts (sisu). Plus, Finns love sauna and getting drunk. Speaking of alcohol, this is troublesome especially during the midsummer eve, as we love swimming too.

So there you have one version of traditional Finnishness. But is this really true? To be honest, in the modern society we don’t rely on stereotypes, at least we shouldn’t. We shouldn’t describe Finnishness by the book, but make our own version of it from own experience. That’s what I’m going to do.

To me Finnishness means loving the nature, and being proud of ourselves/our customs. This might be due the fact that many countries don’t care/know about Finland, but when we are acknowledged internationally, we feel like achieved something relevant (We go to ‘torille’). Thus, we have formed a way to like the things we are good at like ice hockey. This can be seen, for example, in the latest UEFA 2021. Finland hasn’t been very good at football, but they did very well this year. Suddenly all Finnish people were watching and talking about football, even though they weren’t earlier into it. Paradoxically Finns are humble, but we secretly think ourselves better in some aspects. In addition to humility, Finns are quite law-abiding citizens, we respect education and our customs like sauna for example.

As the globalization has tied more countries together and mixed different cultures, Finnishness too has changed. Therefore, we all are not like described above. Not only due the globalization, but due the individuality in the center of today’s society – we want to separate from the mass. Not all Finns love sauna or drink alcohol or have a cottage to go during the summer. Some of us love living in the cities, brag about themselves, and might like things from other cultures closer to our heart. It all comes to our surroundings which make us what we are, and what we want to be like. We are influenced a lot by other countries and global trends, for example by American products, which changes ourselves and therefore Finnishness itself. This is by no means bad thing, it’s just the way it is.

In a summary, traditional Finnishness is about the stereotypes we all know. At its core, we are on a way to become this stereotyped Finn, because we are affected by our surroundings (our parents say that mämmi is good and make us eat it. So there’s potential we start to like it too). However, the globalization and our awareness of individuality has changed us to choose our own path, so Finns along with the Finnishness are constantly changing as they represent our people.

When I think about Finnishness the first thing that comes to my mind is the peacefulness. In our culture peacefulness is appreciated in many situtations. For example we don’t care about too crowded places or too loud people. We appreciate quietness and calmness. I think that’s the reason why we love summer cottages so much. There we can enjoy the beautiful nature in all peace.

In Finland I love our four seasons. The beginning of every season feels like a new start and I think there is something magical with the midnight sun and with the darkness in the winter time. It is just amazing how much the nature changes through the year and that is something I think I will miss during my exchange in Austria.

To me Finnish people are humble and honest. I think the honesty is one of our best characters. It is important for us that you can count on people around you. Humbleness has it’s upsides and downsides. I think sometimes it would benefit us to learn to appreciate our own work and knowledge.

I think one of the best known thing from our culture is the shyness and quietness of the Finnish people. Partly I agree with this stereotype. Still I think that although some of us might be quiet, we are still very polite. I enjoy talking with people and being social, but still from time to time I appreciate the chance just to be quiet.

What finnishness means to me?

First thing that comes to my mind about Finland and finnishness is nature and its four seasons. My favourite seasons are spring and summer when everything blooms and people become more cheery. There is also lots of different events on summer and life feels carefree.

Every time I travel some place else, it is always pleasure to come back in Finland. We have fresh nordic air and there is small crime rate in Finland so it is safe to live in there. Also my family and friends lives there, so it is important place to be.

Second thing which comes on my mind about finnishness is sauna. It is perfect way to relax  especially when you are spending your time in summer cottage or during cold winter. Most of the apartments in Finland are having a sauna too, so you can relax in your own place too. It is probably the most Finnish thing you can do.

Fazer is one of the largest corporations of Finnish food history. The most famous is probably Fazer blue milk chocolate, called “Fazerin sininen” in Finnish. It is one of my favourite candy to eat. Fazer is also known about different salmiakki products. There is also fazer cafe’s all around in Finland.

Autumn is all about getting back to the routines and schedules. Finns have returned from their vacations and are ready to start their normal daily rhythms. This can be seen from crowded gyms and public transports. Mostly Autumn is pretty hectic time and many Finns might feel themselves stressed after the Summer. Weather is getting more rainier and those bright nights are only a memory at this point. Some might feel a bit melancholic about the Summer being over. But still, many Finns also love Autumn because you can stay at home during your free-time without feeling bad about yourself for not doing anything.  Roots, mushrooms, blueberries and apples are some of the most common seasonal ingredients used. Many Finns grow these themselves or picks them up from the near forest. These ingredients can also be found from many of the marketplaces or  from local markets at reasonable price.

Winter is the time for different outdoor sports such as downhill skiing or just regular skiing, skating and ice fishing. Many Finns travel to the Northern Finland during their holiday to experience the different outdoor possibilities. I bet coffee is probably the most used commodity at this season because the evenings are so long and the mornings are dark. The “sun” rises around 8-9 am and sets around 5 pm. People staying in Finland are highly recommended to take extra D-vitamin during Winter time. All in all Winter in Finland is pretty amazing and offers something for everybody. If you like playing in outdoors when it’s -20 degrees, great, or if you’re the type of person that likes staying at home under the blankets- this is the perfect season for you. 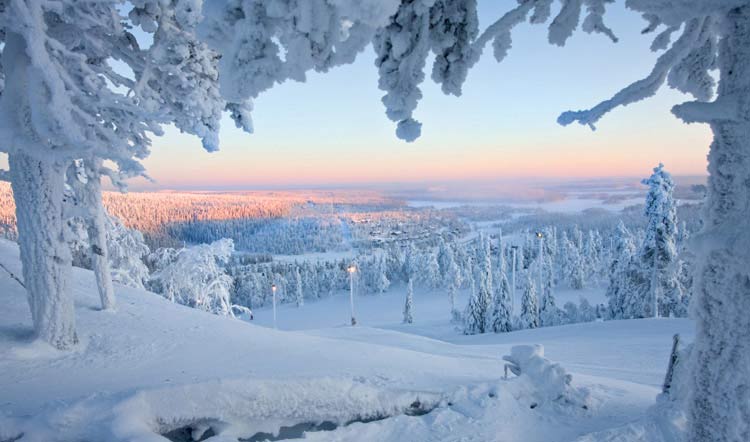 Spring is the time when nature and people wake up after the long Winter. During Spring most Finns plan their summer activities and prepare themselves for Summer. Students are looking for internship and summer job places, companies are hiring new employees, people will prepare their summer cottages and book vacations. Spring in Finland goes fast, everyone is hyped about upcoming Summer and setting expectations for it. People start going out more and wearing less. Narcissus is the symbol of Spring. These flowers can be seen decorating many household’s kitchen table.

Ah the long waited Summer. Like I said earlier, we Finns set a lot of expectations for Summer. Summer is the time to spend time with friends, family and with different hobbies. Most Finns head to the cottages for summer and spend their vacation there. Some travel to countries where there’s actually warm to get proper tan. Some Finns take part in many of the festivals and celebrations that all most every city organizes. There’s something going on in every summer day. The most popular food ingredients are different berries and fruits and meats that you can grill: sausages, stakes, fish… anything mainly. Finnish Summer is truly time for celebration and relaxation.